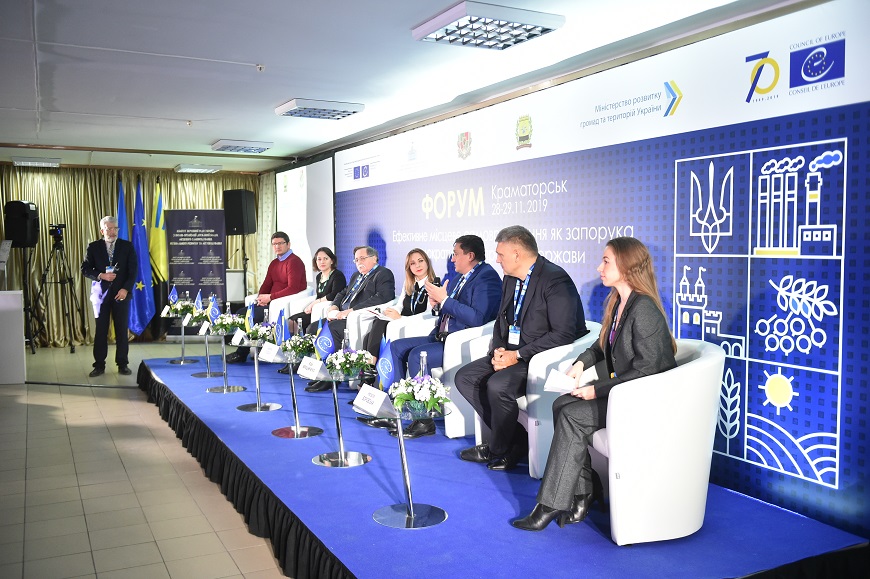 Dec 8,2019
SEARCHING FOR ANSWERS TO CURRENT QUESTIONS DURING THE FORUM “EFFICIENT LOCAL GOVERNMENT AS A BACKGROUND OF DEMOCRATIC AND RULE-OF-LAW STATE”

“In the new administrative and territorial structure, the focus should be placed on the territorial community,” said Yuriy Kliuchkovsky, the Council of Europe expert, member of the working group for the improvement of electoral legislation on local elections under the Ministry of Regional Development. Election issues at the level of territorial communities and other important topics were raised during the IV Forum “Efficient local government as a background of democratic and rule-of-law state”, organized with the support of the Council of Europe, in the city of Kramatorsk, Donetsk region, on 28-29 November 2019. In the framework of the discussion “Next Local Elections: Risks or New Opportunities?” on 29 November the participants of the forum discussed current issues and challenges related to the organization of the electoral process, in particular, during the upcoming local elections that will be held in Ukraine next year. The discussion on electoral matters brought together representatives of the Council of Europe and public authorities, experts and civil society activists: Daniel Popescu opened the discussion with the emphasis on an interesting fact: “In 15 years, less than 50% of Europe’s population will take part in elections.” What does this mean for Ukraine? Such a trend has every chance of not avoiding Ukraine. In the view of abovementioned, Mr. Popescu advises public authorities to continuously work on increasing Ukrainians’ confidence and reliance to elections in general, and, in particular, to the upcoming local elections. As many Ukrainian citizens as possible should strive to influence and change politics through democratic forms and processes. “In an amalgamated community which consists of a considerable number of localities, it is still necessary that the population of the majority of these localities is represented in the community’s council,” continued Yuriy Kliuchkovskyi, mentioning the new law “On Local Elections”. He drew particular attention to the question of what kind of electoral system is needed when electing district and regional councils. Equal representation of all villages, towns and cities through the correct electoral system – is a state priority. Alina Zagoruyko, MP of Ukraine, spoke about the first local elections in amalgamated territorial communities with positive expectations. She also noted that “at present, there is a coherent work between the CEC and the Committee on Organizing State Power, Local Self-Government, Regional Development and Urban Planning. We will involve all parties and resolve the issue of holding the first local elections in Donetsk and Luhansk regions.” 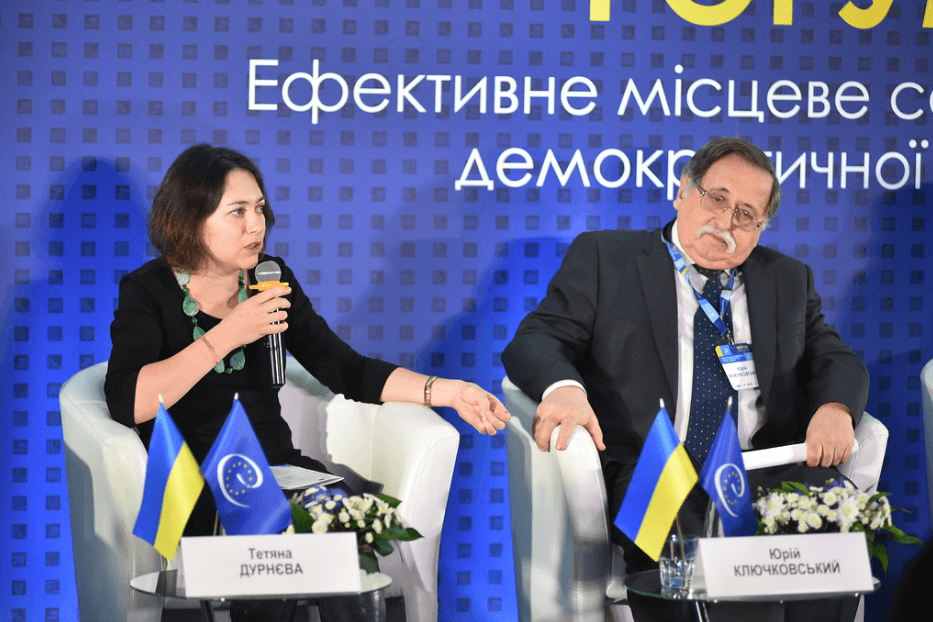 However, in the context of the war in  Donbas and the temporary annexation  of the Crimea, the problem of not ensuring internally displaced persons’ electoral right is quite a challenge for the state, about which talked the Executive Director of the Civil Holding “Group of Influence” Tetiana Durnevа. She noted: “Nearly 4% of voters during the last 5 years have not fully participated in the elections.” However, the Director of “Group of Influence” continued: “The public perception of internally displaced persons and their participation in local elections has changed.” Previously, it was thought that displaced persons – those who had to leave their homes as a result of hostilities – should not participate in the expression of will at local level. And now the public opinion has significantly changed, which is a definite success. In addition, participants discussed other aspirations, prospects and risks of the upcoming local elections, as well as how to avoid fraud and ensure transparency. Another focus of the discussion “Next local elections: risks or new opportunities” was the objective and impartial coverage of the electoral process by journalists. “Democracy does not exist without elections, and democratic elections do not exist without respect for the standards of free speech,” said Olexandr Burmagin, media lawyer, Executive Director of NGO “Human Rights Platform”, that was a member of the coalition of NGOs who conducted media monitoring of parliamentary and presidential elections in Ukraine with the support of the Council of Europe projects. Nataliia Borovska warned against manipulation of statistical data in the media during the elections. “Sociological surveys affect voters and electoral environment, and thus, the results of the elections,” with these words she called on all participants to be more critical of the results of the sociological surveys that we see and hear in the news regarding candidates’ and  parties’ election ratings. “Both risks and opportunities of local elections are our way to democracy,” with such words addressed the audience Yuriy Miroshnychenko, member of the Central Election Commission and speaker of the forum. However, they are only part of Ukraine’s way to desired democracy. Like Alina Zagoruyko, Mr. Miroshnychenko emphasized the need and importance of cooperation and coordination between different authorities and suggested “uniting all stakeholders at the CEC platform as a neutral structure in order to develop effective mechanisms for drafting by-laws [on elections]”. Free, fair and transparent elections in Ukraine are a priority for the Council of Europe. The current Council of Europe project “Supporting the transparency, inclusiveness and integrity of electoral practice in Ukraine”, in particular, aims to enhance the political and legal culture of voters, as well as the ability of public authorities to organize and conduct elections in accordance with European electoral standards and good practices. Text and photos of Council of Europe Office in Ukraine website