From Displacement to Voting Rights Champion for Millions of Ukrainians ➜ 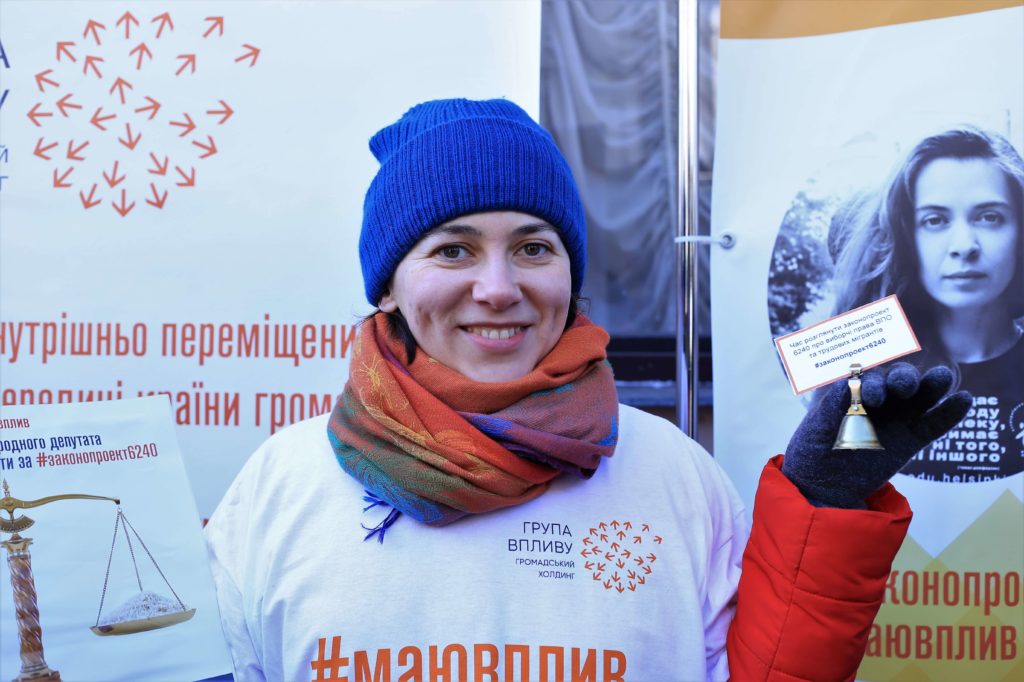 Apr 28,2020
December 19, 2019 was more than just another day for Tetiana Durnieva, Director of the Ukraine-based Group of Influence — a nongovernmental organization. On this day, Ukraine’s Verkhovna Rada (Parliament) adopted a historic, new election code that dramatically transformed the country’s electoral system. The new code opened the door to Durnieva and about 1.4 million other internally displaced persons (IDPs), as well as additional estimated 3-4 million internal labor migrants to participate in all elections.

“That day I wrote in my Facebook that I fulfilled another mission,” says Durnieva. “For me, it was a really important and exhausting long-standing struggle for the constitutional right to vote. Many people, acquaintances and strangers have been following, experiencing and celebrating with us this victory of democracy.”

Over the past four years, Durnieva and her Group of Influence colleagues have been working relentlessly to advocate for electoral reform and raise awareness to ensure that Ukrainian IDPs and other mobile groups can participate in elections. After armed conflict started in her hometown of Donetsk in 2014, Durnieva had to build her life from scratch. One of the obstacles she faced was access to the electoral process: she realized there was no strong advocacy for people like her to enjoy the same electoral rights as other Ukrainian citizens. 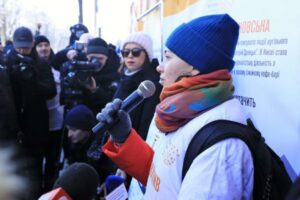 Tetiana Durnieva speaks to the news media and public during the “Invisible Voters” campaign on IDP Rights, organized by the Group of Influence and its partners before the Conciliation Council meeting on March 19, 2018.

IDPs could only vote for political party lists and not candidates from their majoritarian parliamentary districts where they reside. They were also deprived of the right to vote in local elections and for half of parliament. Established in early 2016, the Group of Influence systematically began promoting Ukrainian IDP rights at the national and local levels involving IDPs from all regions of the country, lawmakers and international organizations. In late 2016, Group of Influence’s first project on IDP electoral and political rights was launched as part of a broader initiative supported by IFES to promote democratic progress in Ukraine made possible by the UK aid, the United States Agency for International Development (USAID), and Global Affairs Canada. Through this project, the Group of Influence led the “Every Voice Matters” advocacy campaign to promote IDP electoral rights. The nascent organization navigated through myths and misperceptions about IDPs’ electoral participation as the level of support for IDPs’ political rights in Ukraine was low. During this time, Group of Influence dramatically changed attitudes of politicians and society as a whole toward IDP electoral rights.

“It is hard to understate IFES’, UK aid’s, USAID’s, and Global Affairs Canada’s role in building the Group of Influence’s capacity to advocate for reform and in making system changes happen,” Durnieva says. “In 2016, IFES and UK aid supported the very first project of our newly-established organization and this made us mobilize our resources toward achieving specific objectives.”

The Group of Influence’s challenge was the long and complicated process of building alliances and connections with Ukrainian MPs who would be willing to support legislative changes which at that time had low political and societal support. In pursuit of regional lessons learned, in March 2017, IFES organized a study trip to Georgia for representatives of Ukraine’s Central Election Commission, Ukrainian MPs and civil society activists, including Durnieva.

“For me, this trip was the opportunity to learn about the Georgian experience of ensuring IDP electoral rights and, importantly, to convince the Ukrainian MPs of the need to provide full voting rights to IDPs and to build trust”, says Durnieva. “Later, Ukrainian MPs became advocates of our agenda in the Verkhovna Rada and gathered allies from all groups to register the Draft Law.”

In March 2017, these efforts saw tangible results and Draft Law Number 6240 — seeking to enfranchise millions of Ukrainian IDPs and internal labor migrants, was introduced in the Verkhovna Rada. The bill was prepared in an open and inclusive manner by the Group of Influence, Civil Network OPORA, the CEC, the Verkhovna Rada, the Ministry of Temporarily Occupied Territories and the IDP community, with expertise from IFES. It was sponsored by 24 MPs from all political parties and factions existing in Verkhovna Rada. The draft law was designed to simplify voter registration and entitled IDPs and other Ukrainian citizens to vote at their actual places of residence and their registered permanent residence. 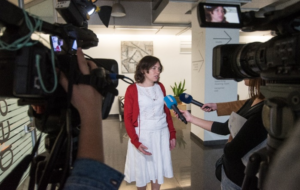 Tetiana Durnieva is interviewed during a press-conference on IDP electoral rights.

The Group of Influence, with support from IFES, UK aid, USAID and Global Affairs Canada, built a well-functioning regional coalition of IDP rights advocates to implement a successful nationwide advocacy campaign, inspired by international standards and best practices targeting MPs, local government officials and the public. By using innovative and tailored advocacy approaches – including in-person and online flash mobs, street actions, advocacy forums, media breakfasts with stakeholders, public discussions with local communities and letter-writing campaigns – the NGO consolidated communities around its advocacy messages and delivered them to decision-makers in Ukraine. These efforts were complemented by active international advocacy with Durnieva and other representatives of the Group of Influence contributing to international conferences and academic publications on IDP political rights. As a result of the Group of Influence’s regional advocacy campaign in 2018, thirteen local councils from across Ukraine directed official requests to Verkhovna Rada MPs urging IDP voting rights.

“When parliamentarians hear this message from national civil society organizations, they do not necessarily prioritize this on their agenda but when they go out to the regions and hear the same message from their voters, local community and authorities – when the international community points at problems with electoral rights of IDPs in Ukraine, this creates the public pressure and resonance”, says Durnieva.

Today, the Group of Influence, is part of a broader initiative supported by IFES and made possible by USAID, Global Affairs Canada and UK aid, has developed into an increasingly self-sufficient, leading voice in electoral and human rights advocacy in Ukraine and has succeeded in consolidating grassroots and political support for its key message – supporting full IDP rights and participation. Now that the new election code has introduced long-awaited reform enfranchising fully millions of Ukrainian, the Group of Influence will direct its efforts to ensure the CEC promptly adopts regulations needed for effective implementation of the new election code’s provisions and inform and educate newly enfranchised groups and the general public about the new electoral rules.

“An important step in a successful advocacy campaign is to implement change and control how lobbied changes to the law work in practice,” says Durnieva. “We are in the process of drafting the CEC regulations and continuing to make recommendations to simplify the procedure for changing the electoral address and keep this issue on the agenda. At the same time, we have the next task – to explain to voters the procedure and to activate citizens to participate in local elections under the new rules.”

IFES’ activities in Ukraine are made possible with support from the United States Agency for International Development, Global Affairs Canada and UK aid. To learn more about IFES activities in Ukraine, click here. Since 1994, IFES has played a key role in the emergence of democratic electoral processes and institutions in Ukraine. Through this period, IFES has developed a reputation as a reliable source for impartial analysis and high-quality technical assistance in the fields of electoral and political finance law reform, election administration, civil society capacity building, civic education and public opinion research. IFES Ukraine