Tetyana Durnyeva: Last Sunday for the first time, IDPs were allowed to vote in local elections in Ukraine ➜ 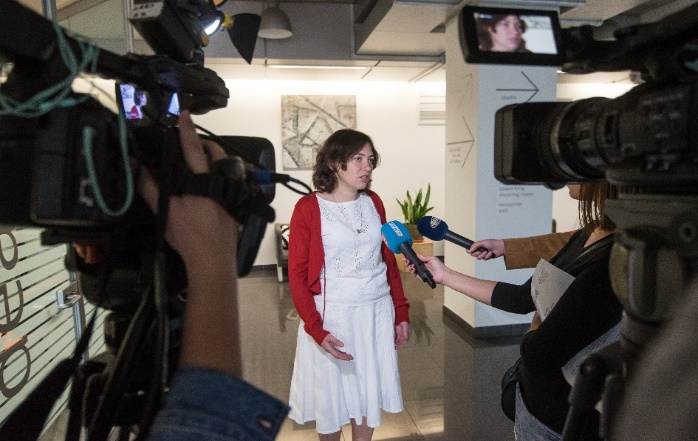 “It started in 2014. Due to military conflict on the east of Ukraine I was forced to leave my home in occupied Donetsk. I moved to Lviv. When there were parliamentary elections in the fall of 2014, I, unlike other citizens, received only one ballot instead of two. Although I knew a candidate running for my constituency, I could not vote for him. Then it became clear that our system of determining the electoral address is imperfect and the Soviet-era residence registration system is a major obstacle. As Ukraine had a mixed electoral system (half of the Parliament was chosen by a proportional system and other half by First-past-the-post system) IDPs could only vote for political party lists and not candidates from their majoritarian parliamentary districts where they reside. In Ukraine, people can participate in local democracy only in places of their residence registration which are often different from the actual ones. We also were deprived of the right to vote in local elections in our new communities. We had limited access to elections, decision-making and participation in public affairs. But we paid taxes! Taxation without representation.

That is, it all started with personal awareness of problems and personal interest. I have been active since childhood, so elections are important to me. I realized there was no strong advocacy for people like me to enjoy the same electoral rights as other Ukrainian citizens.

In 2015, my organization together with the well-known Civil Network OPORA began to draw attention to this issue. Together with the members of Parliament before the local elections in 2015, we developed and registered the first bill on the protection of the voting rights of IDPs. However, it received neither support in parliament nor support among those Ukrainian citizens who also could not vote in the local elections, by their place of residence, like economic migrants for example.

IDPs are not the only group that faced challenges to their enfranchisement in Ukraine. Other Ukrainain citizens, whose actual place of residence is not the same as their registered residence and voter address, also faced obstacles to exercise their electoral rights. They wanted us to include their interests in legislative changes.

The Group of Influence was created by IDPs, but first of all we also engaged other IDPs and economic migrants through surveys and focus group meetings in different regions of Ukraine (west, east, south, north and centre) to understand the problem deeper and find out their opinion on possible solution and to find the best legal model to enfranchise them into electoral process. So, we got data, we had information “from the ground”. We started to involve people.

We followed the rule “do nothing for us without us” and involved people who potentially will be affected by the decision. For example, thanks to a sociological survey, we learned why people cannot change their place of registration. With new residence registration (“propiska”) IDPs were afraid to cross the contact line and could have real problems when they travel to NGCA. We faced legal, practical and political barriers to IDP electoral participation in Ukraine.

Aiming to resolve the outlined problem, NGO “GROUP OF INFLUENCE” together with Civil network OPORA and International Foundation for Electoral Systems (IFES) had developed draft law on Ensuring Access to the Right to Vote of IDPs and Other Internal Migrants.

We worked at Interagency Working Group on Improving National Legislation on the Protection of IDPs Human Rights which was created at the Ministry of Temporarily Occupied Territories and IDPs. We were everywhere – on each working group, each meeting, events, conferences, round tables… Everywhere.

So, let’s do intermediate sum up. 1) realize the problem; 2) ask and engage people; 3) involve all stakeholders.

In March 2017 24 MPs from different fractions sponsored the draft law No6240 which enables all Ukrainian citizens to vote in their actual place of residence by simplifying voter registration procedures and separating them from their formal registered places of residence.

But we had to fight against stereotypes and rejection of the issue of IDPs’ voting rights in society and among decision-makers. We navigated through myths and misperceptions about IDPs’ electoral participation as the level of support for IDPs’ political rights in Ukraine was very low.

We created very strong social advertising. We have used all available communication channels continuously for several years. As a result, public opinion has changed. Residents of the host communities agreed a few years later that IDPs should also elect local authorities.

But members of parliament disagreed. They continued to ignore our political rights. They feared new voters in their constituencies. We went to the streets in front of Parliament with placards and said: “step over our fears, not our constitutional rights.”

However more than 4% of Ukrainian voters remained ‘silent’ and ‘invisible’, and for these people, the value of their voice was increasingly sensitive.

We have involved IDPs from different regions in the joint advocacy campaign. I think one of the key components of success was that we did ongoing training for other activists. We traveled all over the country for advocacy training. We invited people to become our agents of change in the regions, giving them knowledge and skills. They put it into practice.This, among other successful results, led to local government decisions. The 13 local councils from across Ukraine directed official requests to Verkhovna Rada MPs urging IDP voting rights. The local deputies showed their support.

We constantly kept updated of our partners, informing them when MPs came to their constituency. When MPs had meetings with voters, our IDPs asked them about the fate of draft law 6240. The Group of Influence wanted to make the voices of IDPs from all regions heard.

In general, 6240 has become a brand of struggle for political rights. Draft Law 6240 provided mechanisms for ensuring the voting rights of IDPs and other internal migrants in all elections, including at local level.

We caught politicians wherever they were. I say: in every city of Ukraine there are our people, because IDPs have settled all over the country.

We collected about 100 signatures of leaders of public organizations in an appeal to the President of Ukraine Volodymyr Zelensky with a request to protect the voting rights of displaced persons. Our friend, a journalist from Donetsk, personally handed the letter to the President when he was at the press conference in Ternopil, the city where she moved.

The UN Human Rights Committee based on our Shadow report included this question in List of issues in relation to the eighth periodic report of Ukraine.

Council of Europe’s Congress of Local and Regional Authorities called on the Verkhovna Rada to accelerate the adoption of draft law No. 6240

The Parliamentary Assembly of Council of Europe in its Resolution 2198 urged the Ukrainian authorities to provide mechanisms for ensuring the voting rights of IDPs in all elections, including at local level;

Our experts and partners presented the situation on IDPs electoral rights at the human dimension implementation meetings  in Warsaw, in Geneva, in Strasbourg, In Brussels, in Jordan.

Moreover, our international partners in Ukraine constantly emphasized that IDPs’ right to electoral participation is crucial for preventing marginalization, reconciliation, and for making governments more responsive and accountable. The International Foundation for Electoral Systems constantly provided legal advice to MPs, Central Election Commission and the President Office on the international standards and best practice in ensuring IDPs electoral rights.

Thanks to these multi-stakeholder efforts, all the provisions of 6240 were included in the Electoral Code, which was adopted by Parliament in December 2019.

Last Sunday for the first time, IDPs were allowed to vote in local elections in Ukraine

I really appreciate everyone’s contribution to this victory.

The whole society will benefit from the solving of IDP issues. As a result of the national advocacy campaign #EveryVoiceMatter long-awaited reform enfranchising fully all Ukrainians, not only IDPs, was adopted. I think if the government solves the problems of IDPs, life improves for all citizens.

For changing legislation to protect human rights long-term work is needed. You have to understand that there will be no quick changes, so you need to plan resources for the long-term game. It is important to unite as many partners as possible.

You need to be prepared for a long struggle, even where there should be no struggle.”